At 4' x 4' each, the girls are much bigger then I had imagined. I've been working on this idea of young woman's energy mixed with the horse for some time now. The first thought was that this would be an etchings...but they needed to be bigger. So I'm drawing them large for now. I'm getting there but they are not there yet. They are still hanging around fantasy to close. It's not a question of reality for these creatures do exist for me,  but in the two separate bodies. I'm not dealing with the animal nature and the higher mind of man as the Greeks put forth. For a young girl, it is being so close to such power while remaining safe and learning to control and relate in a right way. I've been a riding Instructor for years and watched young women relate and learn about power and it's relationship to them.
I think? One never really knows.
Posted by Unknown at 6:31 PM 4 comments: 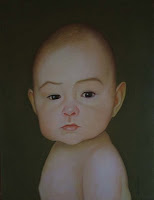 I've finished the new baby. I  decided to start back small.  But I really think the scale of the image is important and will move back up again. I was thinking of this child's aloofness. His separation he seems to have traits of  an  aristocrat. He made me think of Bronzino's Young Man with a Book.
Posted by Unknown at 10:23 PM 7 comments: 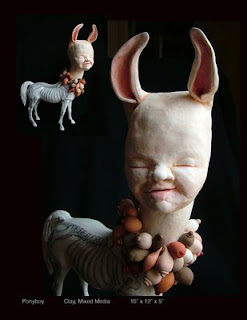 Just finished this toy with breast necklace. I wanted a feeling of the mother powered breast instead of the breast as male toy. So I went to the Goddess from Ephesus, Turkey Artemis. For me the skeleton is the frame work, this child's  foundation is the horse. I'm not the first to think of Artemis, Louise Bourgeois for one found inspiration there.
Posted by Unknown at 11:40 AM 2 comments: